Rounding off LA’s Pride Week 2019, and the night before the traditional Pride Parade, VOX’s final concert of the 2018-2019 season presents a celebration of songs that honor the progress that has been made on behalf of the LGBTQ community, as well as the 50th anniversary of Stonewall.

The concert will feature the Trans Chorus of Los Angeles and a new commission by the award-winning transgender composer Mari Esabel Valverde. Of her new piece, “When the Dust Settles”, with words by poet Amir Rabiyah based on interviews with Miss Major Gracy-Griffith, Valverde says: “We look to the intersections between those in the margins for humanity’s nerve endings — our vastest source for empathy and nuanced outrage. There we find Miss Major Griffin-Gracy, holding the door open for ‘the forgotten ones, the discarded, and misunderstood’ and asking us all to stay ‘strong and delicate.’”

Other repertoire will include diverse compositions such as “Wild Embers” by composer Melissa Dunphy with lyrics by poet Nikita Gill, paying homage to the “wild women” from which we are descended; frequent VOX collaborator Jocelyn Hagen’s composition “Someone Will Remember Us,” based on the ancient Greek poetry of Sappho; and a commissioned arrangement celebrating the 50th Anniversary of the Stonewall Riots by local musician and former Voxxie, Christina Wilson.

“We could not think of a better time to recommit ourselves as individuals and as an organization to our mission of creating a world that affirms the worth and dignity of every person,” says VOX executive director Rebecca Wink. “With everything going on around the country right now, it feels particularly important to stand shoulder to shoulder with our LGBTQ+ community and let them know that they are seen, they are celebrated, and they are loved.” 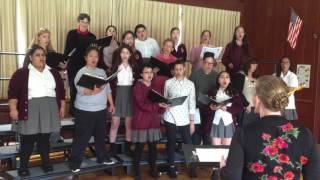